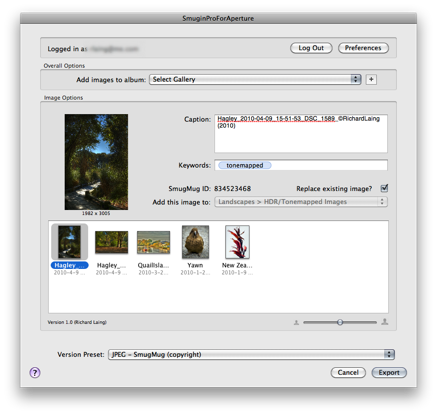 Until licensed the plugin runs in demo mode with the following limitations:

Thanks to all those people who helped with the beta testing, your assistance is been greatly appreciated.

The Kaiapoi Photographic Club had a field trip last night to New Brighton to take some night photographs of the pier. We had a good turn out and the weather was kinder than had been forecast – no rain at least. I took a number of images including several intended for HDR processing later. The resulting images are interesting because of what I forgot:

I also had some fun with the long exposures because my tripod started sinking into the sand resulting in light trails in the image, interesting but unintentional. My final issue was with the lighting on the pier which changes colour and intensity making accurate exposure quite fun; the light colour and strength changes during the exposure.

Someone just left a comment on one of my Flickr photos; a really useful, considered and helpful comment. It made me think how important feedback is in my learning process. It is one of the reasons I take part in my local photographic club; getting feedback on my images, finding out what people like and don’t like about them and ideas for improving them. The other side of course is looking at other peoples images and thinking about them, the more images I look at the more ideas I get. I wish there were more hours in the day.

The quality of comments matters too. It is always nice to hear that someone likes an image and certainly it is rare that anyone will say they really don’t like one – I don’t mind that either; photography is an art and is therefore subjective. However when someone takes the time to say why they do (or don’t) like an image it makes me pause and think. Someone has taken the time to look at one of my images and think about it; that is brilliant. As a photographer I want people to think about the images I make.

So thanks to anyone who leaves a comment on any of my images.

I am still having fun trying out HDR effects, some more natural and some less so. Almost all my images are done using +/- 2 stops just because that is easy with my camera’s bracketing and continuous shooting modes. I still have a lot to learn about Photomatix but I like some of the effects I am getting.

These were all taken with a few kilometres of my house and cover a variety of styles from very grungy to quite natural.

Slightly later than I had hoped (this is software) I would like to announce the release of SmugForAperture v1.0. SmuginForAperture is free plugin allowing images to be uploaded directly from Aperture to SmugMug.

SmuginForAperture is a standard Aperture plugin for exporting images to the SmugMug photo and video sharing site. Upload multiple images to SmugMug directly from Aperture.

You can find out more at SmuginForAperture or download it directly here.

Thanks to all those people who helped with the beta testing, your assistance is been greatly appreciated. Now I need to get on with the ‘Pro’ version…

Spent the day on Friday at Ferrymeade with the kids. Interesting location to wander around, old buildings and vehicles including some old steam trains. The kids had a great time investigating, playing and generally mucking about. The trains weren’t actually running on Friday but they were getting up steam and I guess doing some checks and preparations for taking them out on Sunday and Monday for the Easter Holidays. They have people dressed up in costume as well; a pretty good location for some fun with a camera.

I took a few photographs, as ever not enough time to really process them, on the other hand hopefully they are close enough straight from the camera. I managed to get onto one of the trains and took an close up of some of the bits (can anyone name them?):

also a HDR of some new and old rose heads:

and a really wild cartoon train 🙂 Shame I managed to crop the top off though.